The President and Housing Finance, Part 1

[As the title suggests, this will be a two-part post about…wait for it…housing finance!  Hot stuff, I know.  But it’s important for both the macroeconomy and the people in it.  And, in part two, I ask what to me at least is a very interesting question about all this.  I stipulate that part 1, which follows, is, in fact, boring.]

Boy, it’s a whole different thing to talk about the housing market when it’s looking up.

President Obama’s went to Phoenix, Arizona to talk housing yesterday, a locale no doubt motivated by the double digit increases in home prices there in recent months (according to the CoreLogic, home prices in the state are up 17% over the past year).  Of course, those gains are off an awfully low base as the state was slammed by the housing bust, but it is well established that the housing market is now reliably rising from the dead, which is pretty much where it the last time he talked housing out there shortly after he was elected.

Still, there’s more to be done, including lots of homeowners who would benefit from a refi—yes, mortgage rates have been rising, but they’re still low—but haven’t been able to get one, often because they’re still a bit underwater and their lenders won’t consider a new loan, even if they’ve kept up with their payments.  The HARP program, which has helped 2.6 million borrowers to refi, can’t help them because their mortgage is privately held.  To bring these folks into HARP would take legislation, so not much hope there.

However, there were a couple of interesting things that came out of the speech.

First, there’s a fair bit the President can do without Congress in this space.  For example, he talked about a bunch of rules and guidelines that need to be established that sound really boring (“the qualified mortgage rule”…woohoo!) but are actually critical to getting credit flowing to creditworthy borrowers that are shut out of the system by confusion and nervousness among lenders about how these rules will turn out.

Take “put-backs,” for example.  When banks originate a mortgage loan, they then typically sell it to a secondary buyer, which these days means Fannie or Freddie.  But if something fishy turns up in the documentation, the appraisal, or the underwriting procedure of the loan, the current holder of the security can insist the bank take it back in a forced repurchase.

As you can imagine, these put-backs have become a lot more common in recent years.  One problem is that there’s a real lack of clarity as to what constitutes a “put-back-able” offense, and that’s led nervous lenders to lend only to those with the pristine credit scores (see figure on the right below for evidence).  Getting the regulators to fix this should be quick work.

Second, there’s the fund I wrote about here regarding Detroit to help communities slammed by foreclosures.  Those resources were allocated long ago as part of the TARP, so Congressional approval isn’t needed to put them to work.

Third, attention must be paid to rental markets and homelessness.  Sure, you’d need legislation to due new stuff in this area, but the White House’s fact sheet lays out a bunch of existing programs that can help.

BTW, one success story here that I’ve been meaning to write about is the LIHTC (low-income housing tax credit), a credit that helps support the building and maintenance of low-income (mostly) rental housing.  The LIHTC story (that could be a cool movie title, no?) is actually a microcosm of what needs to happen in the broader housing finance space with the GSEs (more on that below).

The LIHTC basically functions by selling tax credits to investors in exchange for capital that supports the construction of affordable rental housing.  When financial markets froze up, the government stepped in and temporarily took the place of private capital.  Since then, it has left the market as private investors returned, all pretty seamlessly.  Like I said, it’s a story that needs to be told of a simple, effective, temporary market intervention.

Other non-legislative activities in this space include winding down Fan and Fred’s (and the FHAs) outsized role in the market (see figure on left below), while working the regulatory/rule-making process to standardize and simplify the still moribund securitization market.

And it’s here where the next chapter of this saga begins.  In unwinding the clearly outsized role of government  support for housing finance during the bust, the question is what comes next.  The President importantly asserted that the answer to that question is not ‘nothing,’ as some would like.  But whatever the ‘something’ is remains unclear.

His comments and the admin’s fact sheet endorse a continued but diminished role for the government in backstopping the mortgage market.  For example, the President clearly signaled his support for the continued existence of the 30-year fixed rate mortgage.  The logic of that implies that lenders are able to hedge against interest-rate risk (the risk that they lose money by locking in long-term loans at terms that become less lucrative over time), and history and international comparisons strongly suggest that the private market will not offer that hedge.

The key, then, is to a) put private capital in a “first loss” position ahead of the government, and b) set a price for the government insurance that accurately reflects and offsets the expected taxpayer costs of the backstop, something the GSEs decidedly did not do.  Here’s what the fact sheet says about it:

There are two key approaches for reducing Fannie Mae and Freddie Mac’s credit loss exposure: 1) a capital markets approach in which private investors take on the risk of the portfolio’s first losses (a “risk syndication model”); and 2) an insurance approach in which well capitalized and regulated private institutions insure a portfolio of mortgages against default and collect insurance premiums (a “mortgage insurance model” or “MI”).  The period of transition before Congress passes comprehensive legislation should be used to continue aggressively piloting these approaches to both reduce the government’s exposure and gain valuable insights about the most efficient ways to encourage private capital back into the housing finance system.

There’s a Senate bill which helps with “a” above, forcing loan originators to keep enough skin in the game (i.e., keep part of the value of the home loans on their books) to insure a private buffer.  But onlookers may be forgiven for scratching heads in wonderment as to how this differs from what got us into this mess.

In fact, it is different in some important ways noted above: skin-in-the game for originators, a fee that charges lenders for the government backstop.  And importantly, note that these conditions will increase the cost of home loans in much the way you’d expect when you reduce (but not eliminate) a government subsidy.

All of which raises the more interesting question—and yes, I’m aware that much of the above reads like your microwave manual: what is it about the housing market in the US context that we have to go through all these structural somersaults?  Why doesn’t the market figure this out, and price credit accurately?  Where’s the market failure in housing finance that requires all these machinations (even putting aside FHA measures targeted at low-income households)? 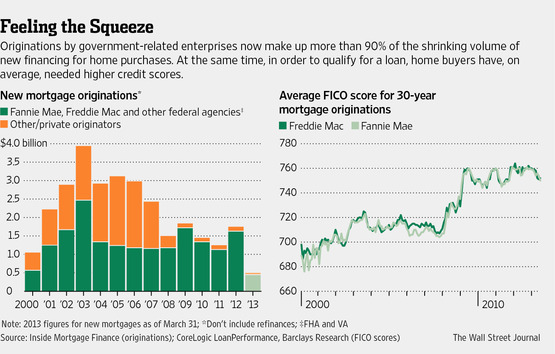 3 comments in reply to "The President and Housing Finance, Part 1"